The northern suburbs of Melbourne are diverse, plentiful, and all-inclusive. They describe a vast array of communities, each with their own unique character and personality, situated north of Melbourne’s CBD. From the lush park-filled suburb of South Morang, to the bustling streets of Northcote, for thirty years we have built homes in the communities of Melbourne’s North.

North East Melbourne encompasses numerous suburbs, including Northcote, Preston, Fairfield, South Morang and Greensborough. The region has become increasingly popular, seeing steady growth each year. According to the Australian Bureau of Statistics (ABS), the population rose from 466,000 in 2012 to 500,000 in 2015. An ideal area for young families, the median age in North East Melbourne, recorded in 2015, is 36. In 2011, the area’s main employing industry is health care and social assistance.

North West Melbourne features a variety of suburbs, including Footscray, Essendon and Pascoe Vale. Like North East Melbourne, the area is steadily growing in population. It rose from 337,000 residents in 2012 to 362,000 in 2015. North West Melbourne also has a median age of 36. However, its main employing industry is manufacturing.

Why is Melbourne’s Northside so great?

The relative affordability of properties in Melbourne’s north compared with greater Melbourne, makes it an attraction option for homebuyers. According to Domain Group’s State of the Market Report, in December 2017, median house prices in Melbourne’s North East and North West were $745,000 and $642,000 respectively. The median price in inner Melbourne was $1,290,000. With lower house prices come lower mortgage repayments. For you, this means less financial stress and more freedom to enjoy life.

Local amenities are an essential consideration for all homebuyers. When you’re moving to a new area you want to know that anywhere you need to go, be it the supermarket or schools, is close by. Melbourne’s north boast a wealth of shops and services, including parks, restaurants, schools/ unis, train/ tram/ bus and healthcare facilities. In South Morang, where our development The One is located, residents are only a short drive from Westfield Plenty Valley which features a new dining and entertainment precinct. They’re also only 15 minutes from the Northern Hospital in Epping, which is one of Melbourne’s largest hospitals. Or northern residents who love shopping, Preston’s Northland Shopping Centre is the place to go. It’s the largest retail shopping centre in the region and features over 300 speciality stores.

Another reason to love Melbourne’s north is the lifestyle. Perfect for families, the area provides a calm and relaxed living environment. It also offers plenty of natural splendours to explore. You can go for a weekend walk around Kinglake National Park on the outskirts of the region. Or admire the beautiful views of Plenty Gorge Park, a short drive from South Morang. While far enough out to escape the hustle and bustle, Melbourne’s northern suburbs are close enough to the city for commuters.

Melbourne’s north is experiencing a boom. According to the ABS, more people are moving to South Morang than any other suburb in the nation. With affordable prices and high growth, a house in Melbourne’s north is likely to yield a good return on investment. So, if you choose to sell in the future, you may be able to make a nice profit. But don’t delay your purchase. While growth is good for homeowners, it can push prices up and make things more difficult for those looking to buy.

Many of Melbourne’s northern suburbs offer good liveability. According to a recent City Pulse assessment by PWC, several northern neighbourhoods, particularly those in the inner north, rated higher than the city average for liveability. The study assesses areas based on data surrounding hospital access, crime rates, housing affordability and more. It found that Reservoir, Viewbank, Yallambie, Mill Park, South Morang, Watsonia and more all rated above the city liveability average of 5.2. Although there are many personal factors to consider when choosing where to live, an area’s liveability rating can act as an excellent guide. It is especially useful if you’re unfamiliar with the region.

As expected for such a high-growth area, Melbourne’s north is teeming with new developments. For buyers, this means more modern homes to choose from. So you can have the stylish, open-plan house of your dreams without any need to renovate or rebuild. From large family homes to chic townhouses and sleek apartments, the area has a variety or options.

For thirty years we have built homes in the communities of Melbourne’s North.

view our developments
Make the move to a better lifestyle 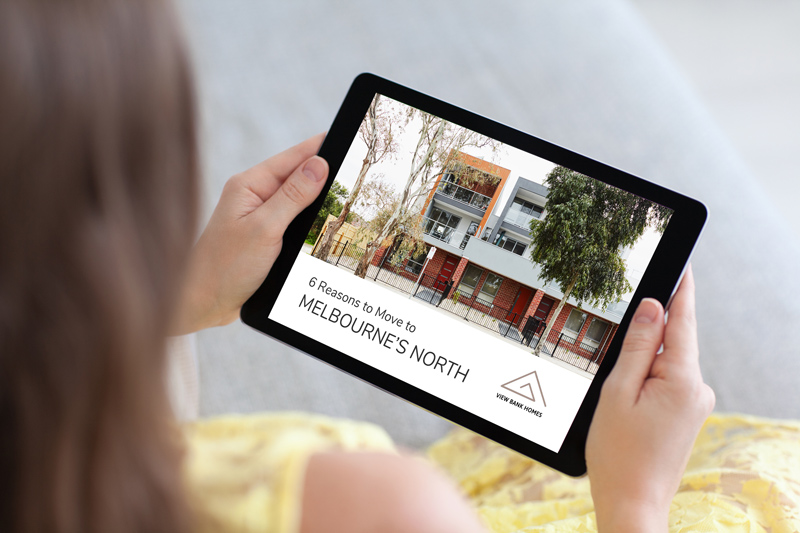